A combined €1.3 million has been invested in scholarships for Limerick Institute of Technology students through the Leaders@LIT programme and the HEA’s 1916 bursary fund over six years, providing 120 students with access to higher education.

31 students have received scholarships this academic year – 21 through the Leaders@LIT programme set up by the LIT Foundation and a further 10 from the Higher Education Authority (HEA) 1916 Bursary Fund, a state programme for access to higher education.  The objective of both schemes is to provide access to college for students who otherwise would not be able to pursue higher education.

Award recipients, along with donors who have contributed to the Leaders@LIT programme, were recognised at a special ceremony earlier this week at LIT’s Moylish campus.

Keynote speaker, Munster and Ireland rugby legend Paul O’ Connell, congratulated the awardees on their achievements, having been supportive of the programme since its inception. He advised students to ‘be careful who you let influence your values’.

“Speaking at this event has always been a great experience. Some of the first-time recipients are speaking and they’re nervous – I can remember being that soldier too when I was young. I love that so many businesses are involved, from international businesses to local businesses. It gives as many students as possible a chance at a scholarship, meaning they don’t need to have two jobs or work as much, they’re getting as much out of their studies as they possibly can,” he added.

Now in its sixth year, the Leaders@LIT student scholarships aim to alleviate the financial strain that can prevent students from pursuing their course of study, allowing them to concentrate fully on their education. The programme has proved hugely successful among students who may otherwise struggle to pursue a third level education.

Speaking at the ceremony, fourth year student in Law and Taxation and Leaders@LIT award recipient Nicola Glazer from Clonlara, Co. Clare, looked back at the ‘challenges and obstacles’ she has overcome during the course of her studies.

“I feel that the financial situation for students is rapidly getting worse and worse. Thanks to this sponsorship I have been able to concentrate solely on my studies in the last four years and am thriving because of it. Time has been flying by and it’s hard to believe that I have been on campus for four years already. Life at LIT is a great experience that I plan to make the most out of,” Nicola said.

“The Leaders@LIT scholarship was a huge weight off my shoulders,” he said of his award at the ceremony. “I was finding it difficult to secure a regular part time position and knowing that my fees would be paid meant that I was able to continue my studies without worrying, plus not having to have a regular position means that I can focus completely on my studies.”

The purpose of the 1916 bursary fund, awarded by the HEA, is to encourage participation and success by students from sections of society that are significantly under-represented in higher education.

First Year Social Care student, Jamie Leahy, said: “I live in Moyross where many people don’t go on to third-level and I was lucky to have positive role models. I now want to be a role model for other people like they were for me. I am proud of where I am today and this is only a stepping stone to where I want to be in the future.

Without this 1916 bursary I would really struggle in third level and I would not be able to help out in my community.”

Jamie continues to volunteer locally with Limerick Youth Service and Limerick Treaty Suicide Prevention.
Also from Moyross and studying social care, fellow 1916 awardee Sonya Ryan told those attending the ceremony about the ‘massive impact’ one of her school teachers at Corpus Christi primary school had on her life.

She added: “Even though coming back to college has been a smooth enough process in the last few months, 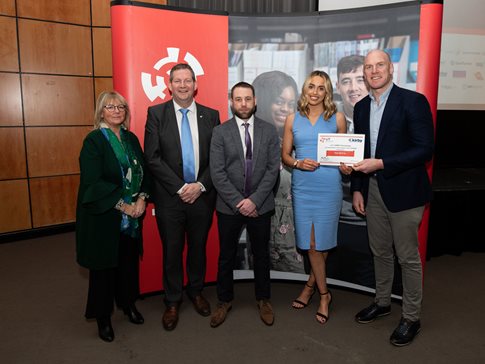 my biggest fear was how I would cope financially. I solely provide for my three children but had to forfeit a payment to restart my education. Without this bursary I probably wouldn’t be able to continue with my studies as the financial burden was becoming too stressful for me.”

“I am delighted to be part of LIT’s scholarship programme and am very proud of this year’s recipients.  These scholarships make a meaningful difference to the lives of students, allowing them to focus on their studies and giving them the greatest chance at success. We are particularly thankful to the donors whose financial contributions make this programme possible. Finally, I would like to thank LIT, for its ethos of inclusiveness, and all staff that help to make this programme a success,” Dr Brown stated.

President of LIT, Professor Vincent Cunnane, said: “LIT is one of the most diverse institutions in the country, with our make-up reflecting the society we serve.  The Leaders@LIT scholarship awards embody our mission and what we are about as a higher education institution, enabling people to participate in higher education in circumstances where they may otherwise be unable to do so. For donors gathered at this ceremony, your support is a vote of confidence in the students' abilities and an acknowledgement of their value to their community, society and the future economy of the region. It is a vote of confidence in the next generation of leaders who may not have otherwise got this opportunity.”

We would like to take this opportunity to thank all our donors to date.