The aim and vision of Social Sciences ConneXions is to promote social inclusion, provide a voice for those who are not heard, and enrich the body of academic knowledge informing social and community practitioners from a variety of disciplines. With this in mind, we are engaged in collaborative efforts with organisations supporting those who are vulnerable through graduate research projects, media appearances, conference and workshop presentations, publications and community research events.

The aim of the Genders and Sexualities Research group is:

To establish the Genders and Sexualities Research group (GSRG) as a leader in academic research in the field that is capable of leveraging research funding and promoting the growth of social science research at LIT. GSRG was established in 2014 and along with two other groups, the Loss and Grief Research group and HEALR (Health, Education And sociaL Research). These groups collaborated in the establishment of the research collective, Social Sciences ConneXions. The three groups in Social Sciences ConneXions were joined in 2017 by two more groups ASCEND and Engage, giving a total of five groups in the collective, with interests across a range of social science research and practice.

Post graduate research at GSRG focusses on a range of topics including performance of masculinities among male identifying members of contemporary LGBTQI* communities in Ireland; social networks of older never married childless women; masculinities and homeless men; and interventions for intimate partner violence.

Principal investigator Dr. Lisa ORourke Scott has a wide range of interests in the fields of psychology and gender. She is particularly interested in topics relating to motherhood, single motherhood, family interactions and intergenerational work.

The Genders and Sexualities Research Group carries out independent commissioned research for organisations most recently in the area of child custody and access in the Irish court system following Domestic violence. The group is also involved in pan European funding bids.

Principal investigator: Lisa O’Rourke Scott
Lisa O’Rourke Scott is a Chartered social psychologist with the British Psychological society, working in higher education. Her PhD research concerns single motherhood, family relationships and intergenerational patterns of family interactions. She has an MSc in psychology and an MA by research and thesis which explored identities in long term unemployed men. She holds a postgraduate Diploma in social science research methods, and postgraduate certificates in education and in social science research methods. She is a psychometrician registered with the British Psychological Society for testing at levels A and B. She has also completed a Special Purpose Award in relationship counselling.

Prior to working in higher education she worked for many years in the voluntary and community sector, as a counsellor, in adult career guidance, in adult and community education and in community development. She has run her own businesses, Scott Training Services and Psychological Solutions Ireland, of which she was Managing Director. She has served on the boards of directors of a variety of community and voluntary projects. Lisa was responsible for leading research development of the Social Sciences ConneXions research collective. She is Programme Director on the BA in social care work at LIT and teaches psychology on this programme. She is Chair of the research ethics review committee at LIT and teaches research methods workshops to post-graduate research students. She has been an Associate Lecturer in psychology with the Open University since 2003 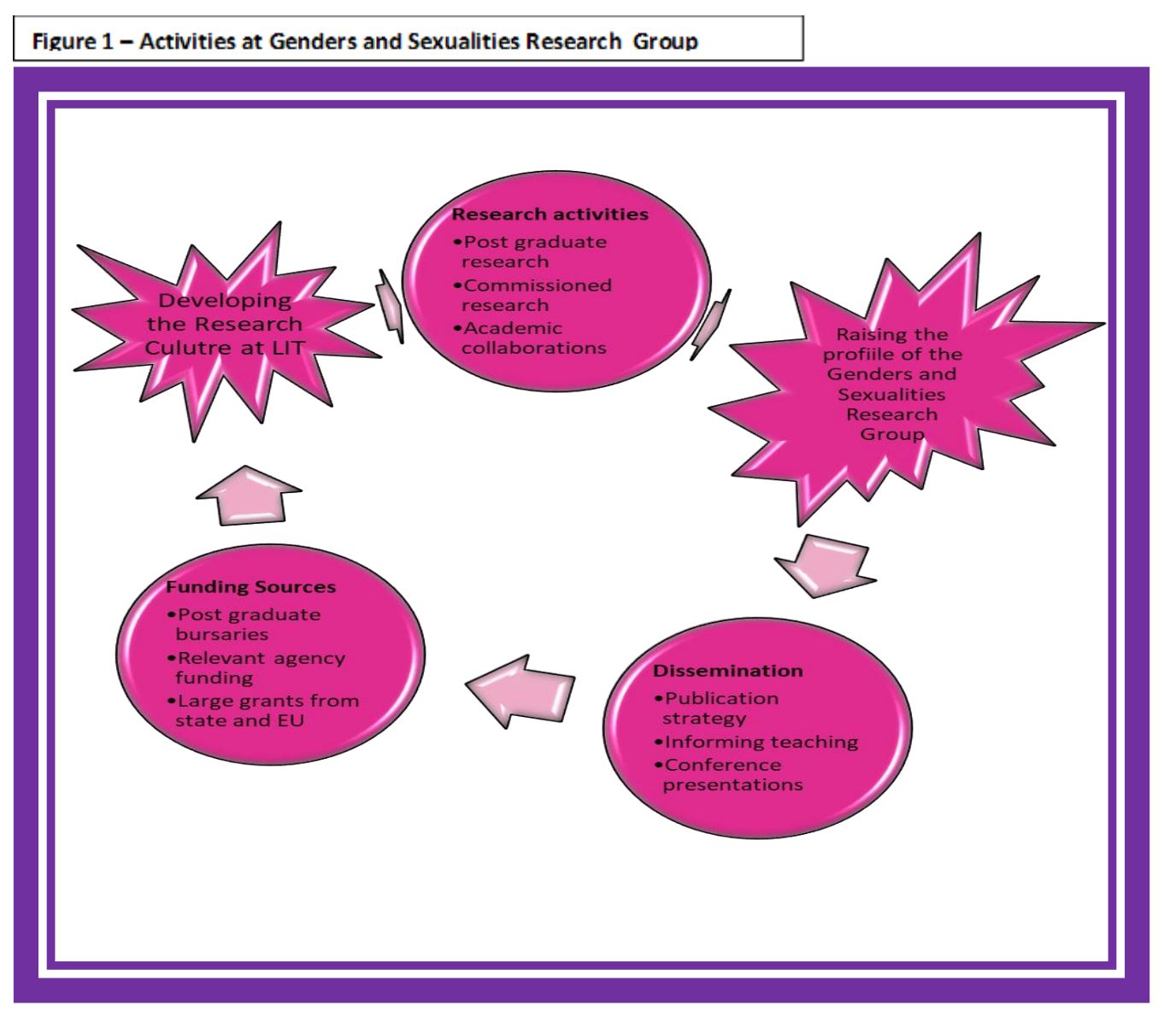 Research Activity:
Research at GASG is carried out in three broad areas, the continuation and development of postgraduate student supervision; commissioned work for communities and strategic alliances with community partners for funding applications. Commissioned research – ASCEND During the first semester of 2018 was spent collecting research data on children’s experiences of court ordered custody and access following maternal exit from domestic abuse.

Memorandum of Understanding – Haven Horizons
In 2018, LIT and Haven Horizons established a Memorandum of Understanding to work together. The LIT Haven Horizons Research and Knowledge Hub: Gender-Based Abuse will be an essential resource for researchers, academics; educators; students; frontline professionals working with those who experience gender-based violence and interested individuals and agencies. As part of this collaboration a funding application for €500 000 was submitted to the Rights,

Equality and citizenship call of the European Union. For this project we worked with international partners in Cyprus, Spain, the Netherlands and in Ireland. The bid was not won but was deemed fundable. Funding for staff buyout for the completion of the grant was obtained from a President’s award. Marking the end of the 16 Days of Activism against Gender Based Violence 2018, Haven Horizons made a donation of books for the LIT library to the Genders and Sexualities research group at LIT on Friday the 7th of December 2018.

O’Rourke Scott L and Houghton F A Critical Reading of the Jedi Knight Internet Phenomenon in Ireland’. Paper presented by at the 5th European Conference on Social Media, Limerick, 21st-22nd June 2018. May 2018

Promoting Research culture at Limerick Institute of Technology:
The Principal Investigator of GASG, Lisa O’Rourke Scott is an elected member of Academic Council and an active participant on the Research and Postgraduate subcommittee. She also chairs the LIT ethics committee and collaborated on a working group to develop ethical procedures for taught programmes and undergraduate and post graduate programmes. The research ethics committee has completed a full review of terms of reference, policies and procedures in the last academic year.

To publicise the event a campaign, funded by our MOU partner Haven Horizons was undertaken in which t-shirts bearing the slogan ‘This is what a feminist looks like’ were sent to various well known people inside and outside of LIT. The event was extremely well attended both from within LIT and also by members of the community

The objective of this research group is to pursue collaborative research with communities in the areas of Critical Youth Work, Community Development and Education & Training. The group contributes to the development of new thinking, new paradigms and new ways of measuring progress within the sector.

The following objectives are being pursued.

Geraldine Maughan is the Principal Investigator for all research projects under ASCEND’s research group which is part of a wider research centre entitled Social Science Connexions here at LIT. ASCEND (Applied Social Care Education and practice in New Directions) is a recent development here at LIT. Officially launched by John Lonergan in October 2017.

The purpose of this group is primarily to look at research areas important to individuals accessing social care services and involve them in data generation. This approach is advocated by the National Children’s bureau (UK and NI). ASCEND’s research activities are motivated by a rights based approach to research. ASCEND is also committed to exploring non-threatening creative research methods.

Key Research Areas:
Experiences of loss and grief, both death-related and non-death related, across the lifespan

Research Mission:
The aim of the Loss and Grief Research Group is to support and encourage creative social sciences research in the areas of grief and loss across the lifespan in Ireland and internationally.

We support and promote research around traditional topics such as death, bereavement, mourning, and suicide, but would also focus on how human beings experience non-death related losses.  The group provides support, assistance, and opportunities for collaboration and reflection on current research practice and approaches, with a particular emphasis on increasing public awareness of the effects of loss and community-based interventions that encourage the effective emotional understanding and management of grief.  Inspired by the disciplines of thanatology and bereavement intervention, the group takes a unique multidisciplinary approach towards the examination of grief and loss in Ireland as it is encountered in various life events.  We lead and collaborate on projects that bring socially-engaged, creative arts-based events and projects to the public as a way to acknowledge, understand, honour and transmute experiences of grief and loss.